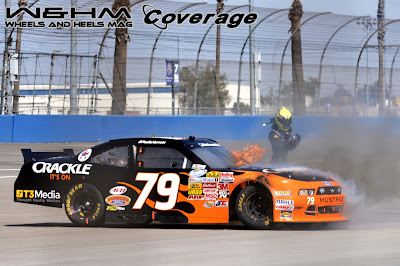 Fontana, CA (Py) - 2013 NASCAR Royal Purple 300 Saturday race had a close call with #79 Paulie Harraka's car caught fire during the race.  The mere three-minutes episode gave us a full picture of just how cool Paulie Harraka is, how efficient the firefighter team works and that NASCAR is a really exciting sport!

During the race, between the Turn 2 and Turn 3, suddenly, there was a car coming toward us and stopped near the wall.  We knew it was in trouble because it was full of smoke and some flames were coming out of the bottom of the car.  We immediately raised the camera to record this.

It was #79 Paulie Harraka's car.  The smoke and fire got bigger and bigger, and then we saw Paulie slided out of the car and very calmly surveyed the situation. 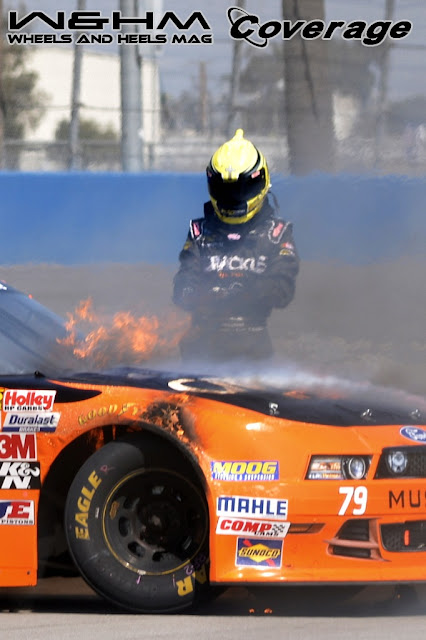 The spectators over the fence on top of their RVs were shouting and getting firefighter team's attention.  In no time, the firefighters were right at the spot, and in less than roughly 5 seconds, the whole things was done.  No fire nor smoke, just the mists from the extinguishers.  We were impressed by the way they handled the hazards at hand, and how professionally it was done.  It surely gives the drivers a peace of mind that they are in good hand just in case the things goes haywire.  Kudos to everybody!

In less than three minutes, the episode is complete, and the race continued.  Paulie was really cool given the misfortune, and the firefighter and truck teams were simply awesome!