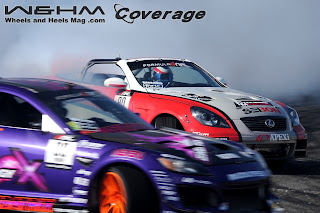 Irwindale, CA (Py) - 2012 Formula Drift Final Round Title Fight not only is an all-action, all-surprise, and all-excitement drifting competition; it's also held at the historical Irwindale Speedway, bringing back the good old glory of the Speedway and energizing the fans all around.  We salute the organizer for the great work!

This year's Formula Drift Title Fight is full of unexpected turns and curves (literally and competition-wise) which makes the event even more interesting.  The huge crowd attendance shows the strong support of the sports of drifting.  Through the strong showing of the drivers and cars, combined with accidents and errors, the competitions kept the spectators on the edge of their seats or their feet.  This is the best Formula Drift event that we've been to and we are very much looking forward to the next year's, the 10th Anniversary, event.  (Actually the tickets for the Round 1 at Long Beach is already on-sale [ext link]!  Very cool!)

The weather at day one (Friday) was as unpredictable as the competition itself.  The day before, there was a huge storm with hails of marble size, temperature dropped to heavy-coat required level.  Then it turned up on Friday and paved the way for a beautiful Saturday of the BIG competition with 93F, dry and clear. It's a gorgeous day!

The competition was full of actions.  Here is the starting line up...

Then during competition cars can fly mid-air, from drifting to floating.  Several times car parts and car fluids became the evidence of car-meets-wall accidents.

At the opening ceremony, cars and drivers and models all showed off their personal/car sides and the fans were just cheering nonstop!  It's almost like a Gladiator event about to begin!

At the final 16 and final 4 competitions, it was a super tight competition, like less than a car length to each other, or less than a foot to the hard-concrete-walls.  Imagine, that you are "legally" tailgating the car in front of you, less than half of a car length, at very high speed, but not on a freeway, but on a winding and narrow road.  This is not just technical, it's mental and sometimes it's spiritual!!  Only the pros of the pros can operate so smoothly and so effortlessly... Wow!

This is a capture of the winner, Daigo Saito, with Achilles girl Arly Elizabeth.  Congratulations!!

After too much excitements, everybody needs to relax a bit, and enjoy the lifestyle expo around the venue.  We have captured the great models of the major tire companies that brought the amazing cars and drivers and smokes to the Formula Drift event.  (Clockwise from top left, Falken, Achilles, Hankook and Nexen)

And there is unlimited supply of Free NOS drinks!  What else can you ask for more?  Life is good at Formula Drift!

Overall, the Formula Drift team has made this a strong and solid sporting event.  They broadened the reach to wider audience and greater partnership.  We are very happy to see this sports to keep growing and become a  major part of the auto sports industry.  Maybe we will have a lot of "Drifting Dads" in just a couple of years...  We will bring more coverage in the next articles as well as the 2013 events with premium quality of pictures to you!
12FDI 2012 Formula Drift Irwindale Achilles Falken Final Round Formula Drift Hankook Irwindale Nexen W&HM CARS
Location: Speedway Dr, Irwindale, CA 91706, USA